The top of the mountain is daunting for young startups at the bottom looking up. Hungry to revolutionise, they aspire to reach the summit; changing the world in the process. But for those who dare disrupt the market to become new industry leaders, the path ahead is perilous and uncertain; guarded by giants who got there first.

The prospect of failure is scary, made even scarier by the omen of statistical failure. Off the bat, a 90% failure rate means you have to be the one in ten if your company is to succeed. But even with the blessing of surviving insolvency and increasing growth, successful startups may face the choice between their aspirations of disruption, and the security of being bought by those already at the top.

Snapchat founder Evan Spiegel decided to march on, refusing to sell his company to Facebook on two occasions in 2013 and again in 2016. Facebook infamously responded by taking Snapchat’s story feature and implementing it on its subsidiary Instagram. In the years following, Snapchat's evaluation fell from a once glorious $24 billion to as low as $6.7 billion. In the particular case of the social media industry, the tale of Snapchat is one of defiance; an up and coming competitor refusing to cave into the demands of established market leaders.

The dynamic in the business of social media can best be described by Warren Buffet on his analysis of the newspaper industry; survival of the fattest. Established leaders have the most financial resources, but more importantly the largest customer bases and the best technical and managerial staff. In an industry so dependent on the interconnectivity of users, it's hard to get people off existing platforms and onto your own. At worst competitors like Kik are forgotten in history with a limited base of users and at best, more successful companies like WhatsApp are simply bought by Facebook.

The monopolistic business practices of large tech companies have come under scrutiny in recent years with Facebook in particular being accused by Congress of purchasing its competitors. Whilst Zuckerberg continues to defend his company's extensive history of mergers and acqusitions, his actions continue to show an alarming pattern; when you're king of the hill, why innovate when you can just buy companies with people that innovate for you. He himself has admitted his company hasn't "bought a company for the company", but rather for the people behind said companies. Talent acqusition, or the practice of buying companies to hire their staff, has been a growing trend in recent times and it paints an uncomfortable question in an industry where talent and business interests often come to clash.

Even if you have the best idea for a startup and the technical skills to implement it, what will you do if an existing company offers you the security of money and a salary, in exchange for the ownership of that idea?

Certainly Spiegel, chose to fierecely defend what was his; a decision which appears to have been for the better, with his company on the rise yet again, in light of the Covid-19 panedmic.

A recurring question in this industry has asked how government regulation can better foster startup growth remains difficult to answer. In the 2020 Democrat party primaries presidential nominee Elizabeth Warren ran on a platform of regulating Silicon Valley, and large tech companies in particular. With her withdrawal from the presidential race, Congress has intermittently looked into the issue, however whether long term results from such hearings have been achieved is dubious at best; the list of social media startups becoming industry leaders in recent times is evidently limited.

To conclude, the success of startups ultimately depends a lot on the product and target market. Neil Patel of Forbes best describes, make sure your "product is perfect for the market". Not competing with the existing apparatus that is the social media industry, is no guarantee of success. However, it is a common ingredient in startups that do succeed. Canva CEO Melanie Perkins attributed her company's success to the lack of an existing and accessible solution to creative design. She was able to provide a service that people wanted, in a better way that existing businesses did, and her startup was rewarded for it.

The problem with trying to compete with tech giants is not that it is impossible, but rather that it is very hard. Aspiring and skilled entrepreneurs must first think, "Can I do a better job?" before creating their own startups.

Whilst the tech industry remains heavily guarded by giants, there are still avenues within it, ripe for revolution by a hungry young startup. 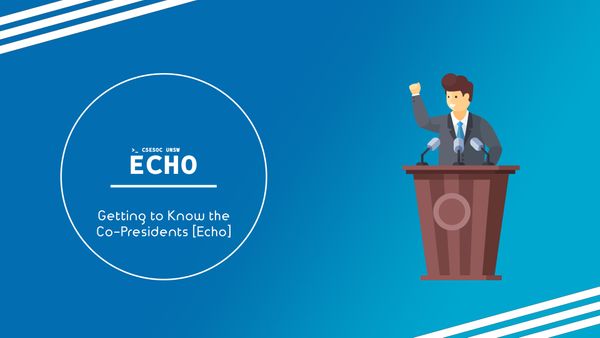 With Exec elections coming up soon, for the third episode of the Getting to Know CSESoc series, Ryan sits down with Co-Presidents Shane and Tammy! They reflect upon the year gone by, their

From Hopper, a classroom queueing platform used across the CSE school, to GDB Tools and Valgrind, which help students decipher their debugging programs, our next Project Showcase guest has worked on an impressive range of projects that make the day-to-day life of a CSE student a little bit easier.